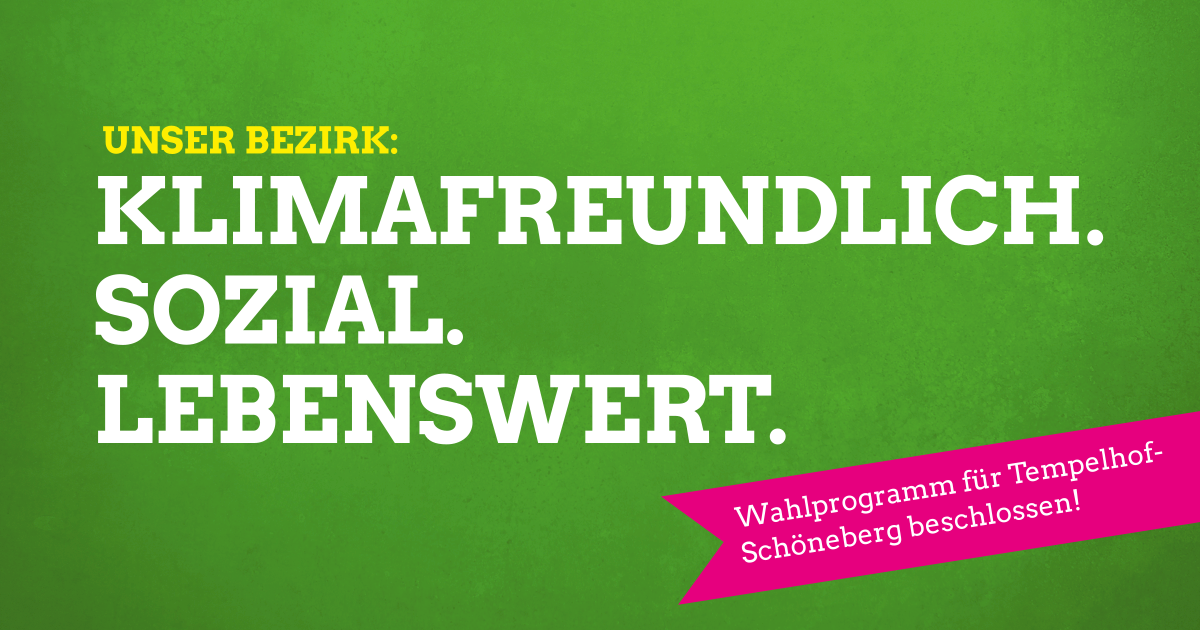 Affordable living in the neighbourhood

➟ Start a model trial for a rental and housing register in our district.

Everyone should be able to afford to live in Tempelhof-Schöneberg. We want to create affordable housing through sustainable new construction and redensification with a sense of proportion. We think about social infrastructure right from the beginning. We rely on strong municipal housing associations, cooperatives and public welfare-oriented private developers as partners. We will continue to protect tenants with low and medium incomes from displacement through pre-emption rights and milieu protection. In this way, we want to maintain diverse and socially mixed neighbourhoods in our district.

We will continue to push for new legislation and a new non-profit housing association, a ban on the conversion of rented flats into owner-occupied flats and state subsidies.

Revaluing green spaces for people, the environment and the climate

➟ Unseal and green at least one percent of public spaces.

➟ Maintain our urban nature, ecologically enhance parks and bodies of water and plant more trees than are felled.

Tempelhof-Schöneberg should become part of the „Sponge City Berlin“. We want to break up and green at least 1% of the stone and concrete surfaces so that rainwater seeps away and the city cools down naturally. We will upgrade green spaces and bodies of water as recreational areas. In doing so, we plant more trees than are felled, campaign for the protection of old trees and for the replanting of new heat-tolerant species. A key challenge is also the water supply to our green spaces. More needs to be invested in irrigation systems. We also rely on your support for irrigation in times of drought. To this end, we want to provide information through the Green Spaces Department and create and develop new opportunities such as watering sponsorships.

The Tempelhofer Feld remains a place of recreation

➟ The Tempelhofer Feld should be preserved in its current form.

The Tempelhofer Feld is one of the largest and most important green spaces in Berlin. Together with the nature conservation associations, we want to further develop it in accordance with its ecological and climatic significance, considering the maintenance and development plan. Furthermore, within the framework of the existing participation procedure, we support the initiatives in the creation of concepts for the use of the area as a recreational space.

Advancing transport policy in an environmentally responsible and safe manner

➟ Strengthen the quality of stay through traffic-calmed zones and low-car neighbourhoods.

➟ Establish a comprehensive network of protected cycle paths and cycle lanes throughout the district.

We want a fair distribution of space between cycling, walking and motorised traffic. By providing parking facilities for bicycles and e-scooters, we prevent corner parking in intersections. We want to strengthen traffic-calmed zones and car-free neighbourhoods and thus increase the quality of life. A comprehensive network of protected cycle paths and cycle lanes and a clear pedestrian traffic concept throughout the district will safeguard both pedestrians and cyclists. The logistics for delivery and goods traffic with inner-city distribution centres, loading zones and stopping bays should be reorganised. With a continuous network of protected cycle paths and a clear pedestrian and delivery traffic concept, we are continuing the restructuring that has begun in the district.

Promoting health in all circumstances

➟ Strengthen the health department in terms of personnel and digitally.

➟ Ensure the preservation of quality of life and social participation in old age and in the event of a need for care.

We promote health from birth to old age, from the city centre to the outskirts of the city, with baby helplines, health district centres, which we are setting up with strong personnel and digital resources, outreach addiction support and care support centres. We are resolutely combating homelessness by expanding support services for the homeless and housing more homeless people in own flats.

➟ Use the “night mayors” in the Regenbogenkiez as neighbourhood managers during the day and support queer projects.

We stand firmly against the right and for a culture of remembrance and welcome. Therefore, we are calling into being a district-wide Alliance for Democracy for a solidary, democratic and social coexistence in our district. We support LGBTIQ* projects. “Night mayors” should also be deployed as neighbourhood managers during the day. In this way we ensure the queer heartbeat in the neighbourhood. We counter violence against women preventively, whether in day-care centres, in care facilities, in public spaces or through direct work with perpetrators.

➟ Quickly refurbish and expand schools in the district and make them digitally fit.

Ailing schools are no place for good education – we want to quickly refurbish school buildings, equip them digitally and build new ones. A new youth welfare plan that makes the important work of the administration and independent organisations transparent is necessary. We also want to modernise leisure facilities, playgrounds, sports fields and cultural sites and develop them as places of learning and encounter.

Supporting local crafts and businesses in our neighbourhood

➟ Counteract the displacement of small businesses and the desolation of shopping streets.

We are committed to making the local economy sustainable and fair, and to creating and maintaining jobs in the process. Commercial land management and commercial development planning should be established. With low-priced commercial rents and a crafts centre, we counteract the displacement of small businesses and secure the business location in our district. We make weekly markets even more attractive with regional and sustainably produced food. In addition, we are committed to strengthening soft and sustainable tourism in the district by promoting corresponding initiatives from the hotel and restaurant sector.

Deciding our future together

➟ In outreach formats of citizen participation, we develop visions for our district and our neighbourhoods together with local residents.

With workshop discussions and citizens‘ councils, we involve private individuals and initiatives in decisions and shape our district with the help of civil society. In this way, we also reach groups such as young families and people with a migration background, who are often underrepresented in participation processes. For example, we strengthen direct democracy in urban development and housing policy. We want to intensify cooperation with neighbouring districts and municipalities, for example in the framework of a neighbourhood forum, because the challenges of housing and urban development policy do not end at the district border.

➟ Digitise the district administration and equip it for „open data“.

➟ Make the public administration more attractive as an employer and recruit more staff for the district.

We will equip the citizens‘ service and public order offices with more staff and make them more attractive as employers. The public administration should be made digitally fit and equipped with „open data“. We are developing the climate protection officer into a climate protection manager. With solar systems on the roofs of the district administration, we are converting the district’s own buildings into energy and cost savers. In this way, they contribute to the socio-ecological turnaround.